Judge Paul Ridgeway Rules Witnesses can be Sworn in With Quran

One of our local (Wake County) Judges has ruled that witnesses in court can now be "sworn in" with just about any religious text, including the Quran.  I completely agree with this decision and applaud Judge Paul Ridgeway for the courage to do the right thing.

Interestingly, the stories don't mention that witnesses already have the ability to "affirm" to tell the truth when being "sworn in."  This was an accomodation for people who's faith did not allow them to "swear" on the bible.

It only makes sense that a witness can provide their own religious text upon which to swear they will tell the truth.  I guess the point of the excercise is that if you truly beleive in the teachings of the bible, you would not want to offend God by lying.  So if you don't belive in the Bible as holy scripture, shouldn't you be able to swear on something you do believe in?

I think Judge Ridgeway saw through the politics of the controversy, and realized that anything that promotes the real search for truth, would suffice.

From the Greensboro News-Record

Muslims can now swear on the Quran when called as witnesses in North Carolina courtrooms, a Wake County judge ruled Thursday.

The decision represents a victory for the American Civil Liberties Union of North Carolina , which sued the state after two Guilford County judges rejected an offer from an Islamic center to provide county courthouses with free copies of the Quran.

"The highest aim of every legal contest is the search for truth," Wake Superior Court Judge Paul Ridgeway wrote in an 18-page opinion. "To require pious and faithful practitioners of religions other than Christianity to swear oaths in a form other than the form most meaningful to them would thwart the search for the truth.

"It would elevate form over substance."

The Guilford County judges argued that North Carolina law only allowed oaths to be taken on the Bible. Ridgeway agreed that a phrase in the law governing oaths, "Holy Scriptures," refers to the Bible, but he cited other case law that would allow a Muslim to swear on the Quran.

I think this is a decent idea, in general terms, though I doubt that it will do much to actually prevent predatory practices.

Realistically, if a sexual predator is being "smart" they will have no real identifying information on their MySpace profile.  Given the absolute ease of setting up free and virtually untraceable email accounts, I don't see any way for MySpace and the Attorney General's office to "trace" predators to MySpace.  About the only thing that i can think of would be to require sexual predators to register their ISP Providers and addresses, and trace the original source of the profile that way.

I'll be interested to see if this actually "eliminates" any predators.  It is one thing to prevent predators from coming near schools and libraries.  The Internet is just so unregulatable, and is essentially one "big" play gorund for kids, and those who seek them.

Honestly, I have no idea if this is "good" or not, but it averages out to about 30 new visits per day, so I think in general, it's been a good thing.

For those very few that subscribe to an RSS feed, sorry I've not been posting a whole lot lately.  I had a month long trial in Charlotte, back in March, and that kept me pretty busy for the two months before, and the two months after.

I'll be posting some new lien resources in the next few weeks, and I'm working on a neat little software package that might just help the lawyers out there.

As always, send me your suggestions by email to nicholsatty@gmail.com, if you have them. 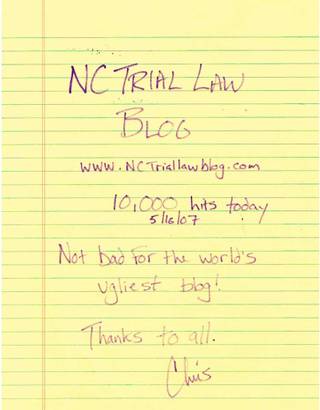