I try to keep this Blog fairly apolitical, but during an election season that can be difficult.  My feelings about so-called "tort reform" are pretty clear:  it is generally a terrible idea that only hurts the truly innocent- people who have been hurt by someone else's negligence.

That said, where do Obama and McCain stand on Tort Reform?  I've tried to present the information below from the most unbiased sources I can find.

I've included some links from traditionally conservative voices.  The Club for Growth and an AMA related website.  Most of the information is somewhat critical of McCain for not supporting tort reform "enough."  Because of the nature of the primaries, there is plenty of information about McCain and tort reform from conservative sources (most of which didn't think he was tough enough on tort reform).
From: The Club For Growth:

The American economy suffers from excessive litigation which increases the cost of doing business and slows economic growth. The Club for Growth supports major reforms to our tort system to restore a more just and less costly balance in tort litigation.

Senator McCain's record on tort reform is generally positive. These votes include:

This generally positive record, however, is tarnished by Senator McCain's sponsoring of and outspoken support for the Patients' Bill of Rights,[69] which encouraged an increase in the number of frivolous lawsuits filed against healthcare providers. He also voted against the Litigation Uniform Standards Act, which limited the conduct of securities class actions under state law.[70]

And for what it is worth, here is a transcript from a Rush Limbaugh Radio Show where Rush refers to the above website in order to assess McCain's willingness to implement tort reform.  Rush seems to agree with the above- McCain has a good start but could do even better on tort reform.

If we assume that what a politician promises in one election they would support in another election, we can go back to 2000 when McCain was running against Bush in the Republican primary.  McCain's website then stated:

"John McCain has been a leading proponent of lawsuit reform at the federal level. He recently authored the Y2K law that will help limit potential frivolous lawsuits resulting from the Y2K computer problem while also protecting the rights of those truly injured to bring a legal action. The bill addresses the needs of businesses that may find themselves as both plaintiff and defendant, by providing incentives to fix Y2K problems, not rush to the courthouse.

"John McCain also supports small business relief from 'Superfund' liability. He believes the law imposes too severe a penalty on small businesses. He supports changing the regulations to limit the liability of small businesses to the amount of pollution they directly caused to a site, and no more."  From Freedom Works

Arizona Sen. John McCain said tort reform is a top priority. He's supported caps on awards and expressed some support for a loser-pays rule. "We cannot let the search for high-quality care be derailed by frivolous lawsuits and excessive damage awards. … Liability reforms should eliminate lawsuits for doctors [who] follow clinical guidelines and adhere to patient safety protocols."

McCain laments increased costs stemming from defensive medicine. "In every other industry when technological advances are implemented, costs to the consumer decreases," he told supporters in South Carolina. "This is not the case in health care. … I can't tell you the number of tests that all of us in this room have taken just so that doctors won't be sued for malpractice."

And while this is not necessarily a "tort reform" issue, McCain supports changes to our health care system which would take most self-funded health insurance plans OUT of ERISA pre-emption.

The senator does suggest he would change current pre-emption provisions in the Employee Retirement Income Security Act, when he says he would "give states the flexibility to, and encourage them to experiment with: alternative forms of access; risk-adjusted payments per episode covered under Medicaid; use of private insurance in Medicaid; alternative insurance policies and insurance providers; and, different licensing schemes for medical providers."

ERISA adjustment is also implied by his call to "build genuine national markets by permitting providers to practice nationwide" and his proposal to "allow individuals to purchase health insurance nationwide, across state lines, to maximize their choices."

Obviously, in North Carolina, taking self funded health plans out of ERISA would have a "pro-plaintiff" benefit because self-insured entities would be subject to NC's anti-subrogation rule.  Clearly, this is an unintended consequence for our state.

Finally, according to AllBusiness.com, McCain has publicly lamented increased costs stemming from so called defensive medicine, where doctors allegedly over-cautiously order multiple tests in the hopes of avoiding any mistakes or liability. "In every other industry when technological advances are implemented, costs to the consumer decreases," he told supporters in South Carolina. "This is not the case in health care.... I can't tell you the number of tests that all of us in this room have taken just so that doctors won't be sued for malpractice."
Barack Obama on Tort Reform:

As a lawyer and constitutional law expert, Obama has spoken favorably of civil litigators at times, but has also been noted in the press to be somewhat more critical of "trial lawyers." While campaigning for the Senate in Illinois years ago, he said, "Anyone who denies there's a crisis with medical malpractice is probably a trial lawyer." [Unsubstantiated info ahead] Furthermore, it has been noted that Obama voted in favor of caps on non-economic damages in medical malpractice cases when he served in the Illinois General Assembly. [NOTE: I pulled this quote from a business website doing a neutral review of the tort reform stances of the candidates.  It was old (pre-nomination) and fairly balanced.  Of course, there was no reference in the article.  I've been questioned on this now, so I'm trying to verify the so-called votes.  Frankly, I was suprised that Obama would vote for any type of cap given his Constitutional experience, so this could be my bad reporting compounding someone else's bad reporting.  Good thing I'm not a reporter!]
In 2005, Barack Obama voted for CAFA, the Class Action Fairness Act of 2005. Who voted against it? Hillary Clinton, Dick Durbin, Ted Kennedy, Pat Leahy, Joe Biden, Barbara Boxer and other progressive Democrats.  The Class Action Fairness Act was strongly supported by business groups like the US Chamber of Commerce.
The ABA describes CAFA in this way:

In a nutshell, the Class Action Fairness Act has two principal parts. One set of provisions establishes new procedural and substantive standards applicable to class action settlements. Some of these merely duplicate (or add little to) existing practice under the Federal Rules of Civil Procedure, but others — such as new limitations on attorneys’ fees in coupon settlements and requirements that government officials be notified whenever a class action settles — are brand new.

In addition to the CAFA bill, Obama has taken a position on medical malpractice tort reform which focuses on improvements in patient care and lower error rates.  In fact, Obama and Hillary Clinton co-authored an article in the May 25, 2006 issue of the New England Journal of Medicine, entitled "Making Patient Safety the Centerpiece of Medical Liability Reform."

In conjunction with the publication of their article, Obama and Clinton introduced and co-sponsored the National Medical Error Disclosure and Compensation (MEDiC) Act of 2005, a bill that, in part, would have required hospitals to disclose errors to patients and would have also created a national patient safety database. The bill further proposed to create a Department of Health and Human Services program that would seek early compensation for patients and offer liability protections to doctors in exchange for their disclosure of errors and apologies. This legislation was never realized and died in 2006.

The Last Frontier:  The Supreme Court of the United States

Other than the candidate platforms and positions, many would argue that the real "tort reform" is accomplished by appointing Judges who will take "tort reform" positions on legal cases.  Justice John Paul Stevens (88 years old) and Justice Ruth Bader Ginsburg (74 years old), are both considered to be left leaning and potentially ready to retire in the next four years.

About the Supreme Court, Obama has said in a July 7, 2007 speech  "We need somebody who's got the heart, the empathy, to recognize what it's like to be a young teenage mom. The empathy to understand what it's like to be poor, or African-American, or gay, or disabled, or old. And that's the criteria by which I'm going to be selecting my judges."

McCain has said, "I tell you I will nominate only people who have a clear, complete adherence to the Constitution of the United States and do not legislate from the bench. That's who I'll nominate to the U.S. Supreme Court."

This article will not attempt to futher address the issue of Supreme Court appointments, though obviously the candidates would presumably appoint Judges who agree with their general philosophy on the law.  Whether that position is "pro-consumer" or "tort reform" will be for the reader to decide.

I'll update this article as I find more information.  Obviously, John McCain has a long voting record, so there can be much more analysis of his voting positions than of Obama.  I may also try to take a look at the positions taken by Biden and Palin, although, again, Biden will have a much deeper record than Palin. 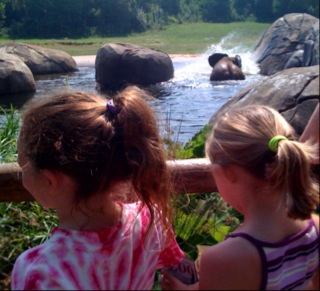 I've recently switched over to using the iPhone as my primary wireless device. I'm posting this directly to the blog from the iPhone. The photo was taken with the iPhone last weekend at the zoo. That is a baby elephant playing and splashing in the background past my daughter and her good buddy.

So far, I think the iPhone was a great decision and change from my Treo 650.

The biggest improvement? Web browsing and anu Google based product. On the Treo, I could access the web, but it really was "emergency only" necessity browsing. It just wasn't fun.

The iPhone is actually pleasurable for net browsing.

Ok, the touch screen typing is a tough adjustment, but the auto correct works very well and that makes up.