Home Archives Profile Subscribe
Medical Malpractice "reform" proposed in NC: Do it yourself tort reform release
North Carolina Legislature wants to give immunity from law suits to manufactures of deadly products that kill and maim people and destroy property

How some lawyer lobbyists are posing as "the people" in order to take away the right to a trial by jury for those maimed or killed by a small group of bad doctors: The birth of "astro-turf" organization "North Carolinians for Affordable Health Care"

OK folks, hold on to your hats (does anyone wear hats these days?) it is time for a trip down an Orwellian rabbit hole (to mix some metaphors) into political intrigue, lawyers, lobbyists, and a organization posing as "we, the people."  No, it's not a national political party, its a North Carolina effort to take away the Constitutional right of trial by jury if you, or someone you love, is maimed or killed by a simple, preventable, mistake.

As these things go, we lawyers know that the best way to get to the bottom of things is to "follow the money" and that's what this post is all about.

And of course, what I'm talking about is the very recent creation of a "grass roots" effort to change the the laws of medical malpractice in North Carolina.  That "grass roots" organization stealthily sprung to life on March 10, 2011, as a non-profit organization called "North Carolinians for Affordable Health Care, Inc."

What follows is the story of the "birth of an astro-turf" organization.  And if you are not familiar with that term, let me give you my definition.  We've all heard of "grass roots" organizations, right?  They start out with regular people who have a concern about something.  Those people organize and get the word out and suddenly they create a movement which gains momentum.  And when that movement gets big enough, these regular people get a "voice" on the public stage with the politicians and large corporations that can simply "buy" access to government with lobbyists.  Well, "astro-turf" is the opposite of that.  An "astro-turf" organization is something created by a corporation or a lobbyist to appear to be "of the people" when it is, in fact, just a shill by "the man"- some corporate interest that wants to pose as "the people."

As you read this rather lengthy post, you'll get to see how a small group of politically connected lawyers created an "astro-turf" organization to persuade politicians and the public to take away the rights or regular people to bring a claim against an insurance company and hospital when that hospital makes a mistake that injures, maims, or kills someone they love.

3/10/2011 Articles of incorporation for North Carolinians for Affordable Health Care (NCFAHC) is filed.

The name and address of the incorporator is R. Donavon Munford, Jr., 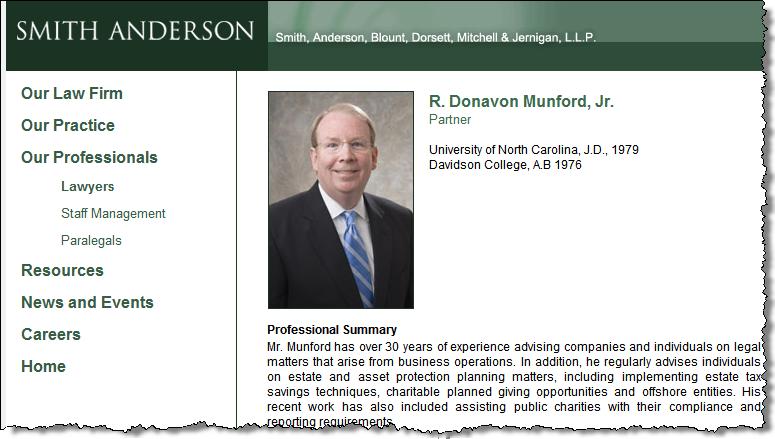 R. Donovan "Don" Munford was a Republican member of the North Carolina General Assembly representing the state's thirty-fourth House district, including constituents in Wake County from 2002. Munford is a lawyer and accountant from Raleigh, North Carolina.

Munford ran for re-election to the North Carolina House of Representatives in the 2004 General Assembly election. He defeated J.H. Ross in the Republican primary, but lost to Democrat Grier Martin in the November 2004 general election.

He is a partner at Smith Anderson, the largest law firm in the Raleigh area. He practices in the areas of corporate and business law, estate planning and asset protection planning. Munford is also a licensed Certified Public Accountant. (Reference: Munford Wikipedia Entry) 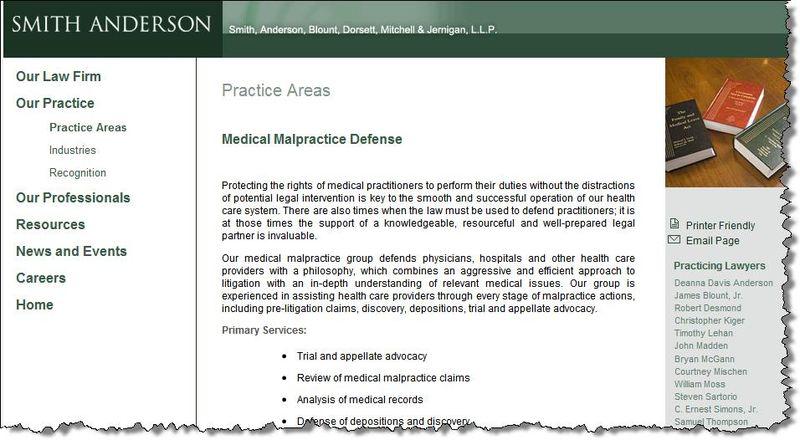 Smith Anderson Law Firm has a longstanding relationship with the North Carolina Medical Society and lobbies for them before the General Assembly. 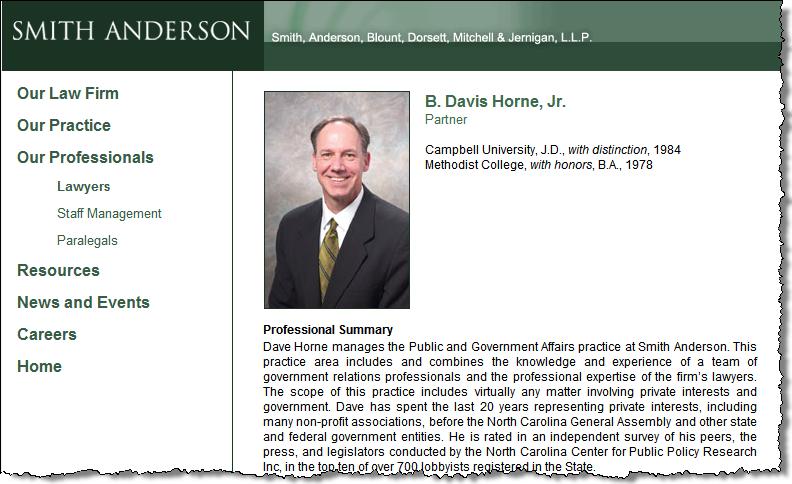 The North Carolina Medical Society is lobbying for immunity from negligence for Emergency Rooms in NC. 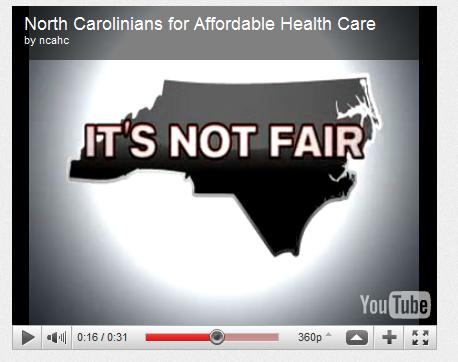 Are "North Carolinians" demanding immunity for negligent Emergency Rooms and physicians, or is a small group of lawyers, lobbyists, and physicians looking to walk away from their responsibility to the injured, maimed, and killed?

Can anyone explain how making Emergency Rooms immune from claims or lawsuits for "negligence" furthers the Medical Society's stated purpose to"raise the standards for their profession" and "protect the quality of patient care?"

North Carolina Senate Bill 33 (SB33) does exactly the opposite.  SB 33 changes the rules for any medical person in the Emergency Room and eliminates responsibility for "negligence".  This does not "raise the standard" for the profession, but in fact drastically lowers the standard.

So how does this "protect the quality of patient care?"  Well, what happens when you say "you can no longer be held financially accountable for the consequences of sloppy work, negligent work, or breaking and ignoring the established rules in all other Emergency Rooms in the state of North Carolina?"

Does taking accountability away from Doctors, Nurses and Hospitals somehow make people more responsible?  Or does it make them act "less responsible?"

How about this?  What would happen if we eliminated all speed limits in North Carolina, and just told people not to drive "grossly fast"?  Would our roads be safer, or less safe?

Bottom line, the NC Medical Society, through their lawyers and lobbyists are "posing" as you, the people, in an effort to take away your right to hold a small group of bad doctors accountable.

And of course, where do the ACTUAL people stand on this issue? 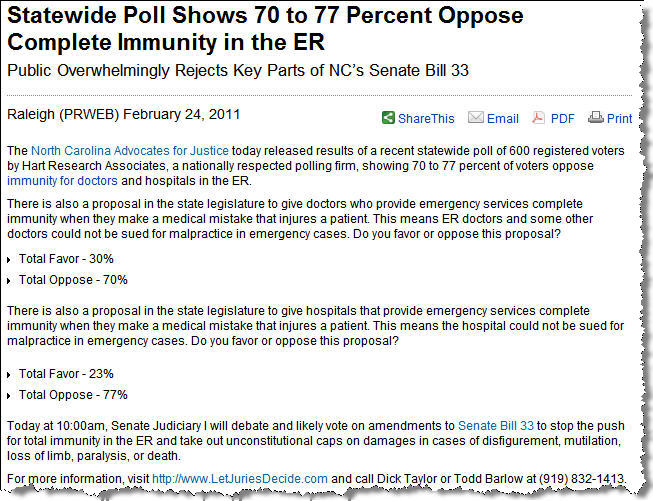 Please write your elected House member a note and tell them to oppose this Bill.

Here is how to look them up:  Who Represents Me?

really interesting Chris! posted a link through my twitter to your blog. NC insurance companies are taking a very alice in wonderland approach to how they present to the public.

This comment has been removed because it is spam.

North Carolinians for Affordable Health Care...more like corporate money to pass the cost of malpractice on to the injured or

"Corporations for Increased Profits on the Backs of the Injured"

I sure would like to know if it is a non-profit. If it is and a substantial part of the organization is to engage in lobbying or politics, it violates federal law, no? Maybe someone should blow the whistle on these guys...

I'm not really sure what's the difference! but I think that every involve or member in the constitution should arrive at a conclusion or give at least statement that will notify about the said issue.

I don't have any word to express for this post. I am totally impressed with us.Please keep up the great review like this. http://www.brownritner.com/

I appreciate your blog, its very interesting and quite informative.Thanks and keep up the nice work like this.San Diego Criminal Defense Attorney

For almost everything you will need finance and when it just isn't planned properly the finance may go waste plus your requirements tend not to get fulfilled my website although bankruptcy isn't necessary due to poor loan decisions, it comes with a implication about the ability of the person to spend financing.